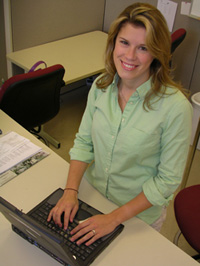 Morison – a Mandeville, Louisiana, native and industrial and systems engineering major set to graduate in December – interned in spring 2005 with Sen. Cochran, chairman of the powerful appropriations committee. The experience at the Capitol will influence her for the rest of her life. She now looks forward to the job she wants in the city she wants to work at just weeks after she’ll graduate from Mississippi State University.

Working in Sen. Cochran’s office involved answering constituent e-mails, phone calls and letters. She further developed her people skills while working around one of the most political environments in the country. Although she showed communication skills, enthusiasm and other desired skills at MSU’s Starkville campus, her congressional internship put her in a situation to showcase herself where few other students ever will. “This definitely helped with written skills and people skills,” Morison said during a recent interview in McCain Hall. “There’s no class like having a real job.”

Just a handful of people will experience working for one of the most powerful senator’s in the country. Working with Sen. Cochran during a budget cycle allowed her to do research on federal budget appropriations requests. It also allowed her to meet people until then she had only seen on television, movies and magazines. Angelina Jolie popped into Cochran’s office one day while Morison worked. “There’s always somebody walking into the office,” she said. “We went walking around the Capitol looking for Brad Pitt.”

The uncertainty of who she would meet, along with getting work experience that would set her apart from most college graduates for the rest of her life all factored into daily life during Morison’s internship. However, each fall and spring semester a student in the Bagley College of Engineering experiences a semester-long internship with either Sen. Cochran or Sen. Trent Lott. The Congressional internship program through the College of Engineering aims to show MSU students the inner workings of how public policy emerges on Capitol Hill. The MSU program started in 1999 put college students with solid academic standing, outgoing personality, demonstrated leadership ability on MSU’s campus, and a self-starting attitude. An engineering degree can be a key to many opportunities besides traditional engineering fields. It can lead to a MBA or law degree.

“We have lots of students who are interested in public service careers,” said Dr. Donna Reese, associate dean of the Bagley College of Engineering and chairwoman of the congressional internship committee. “They get to see how the political process in Washington, D.C. works.”

Most interns in the program see things much closer than they ever thought. For Julie Carnathan, an industrial and systems engineering graduate, that meant watching President George W. Bush’s State of the Union address earlier this year in three rows down from where Laura Bush, the First Lady. Carnathan sat next to Martha-Ann Alito, whose husband was confirmed earlier that day as a justice in the Supreme Court. “It was just being in the right place at the right time,” Carnathan said in a phone interview. “Senator Lott had an extra ticket.”

While Carnathan counted sitting next to such famous people at President Bush’s address to the country as the highlight of her internship, she also learned the technical, complex side of making policy. Carnathan attended hearings that led to the rewrite of the Telecommunications Act of 1996. The exposure to changing public policy with a focus on results led to Carnathan accepting a consulting job in Washington, D.C. after her internship. The Jackson, Mississippi native now works for Herren Associates, one of the country’s leading engineering and management consulting firms that assists the Navy in helping decide which ships are the best value to purchase, among many other duties. Carnathan’s internship experience opened her to a bigger world. Before accepting the congressional internship, she expected to take a job after graduation working for a company in Memphis or Atlanta, somewhere closer to home. She appreciates how the opportunity changed where she started life after college. “It’s probably the best move I ever made,” she said. “It really changed the course of my career and really my life.”

Carnathan’s consulting job keeps her around people associated with Mississippi and MSU. Jeffrey L. Herren, president and CEO of Herren and Associates, also graduated from MSU with a bachelors of science degree in industrial engineering from MSU. Herren makes no secret about enjoying hiring MSU graduates. His company offered a job to Morison that she begins in January, a month after completing her graduation requirements in Starkville. In between talking about plans to move back to the Capitol to work in a few months, Morison encouraged other MSU students to apply for the congressional internship. “Having that kind of job helps you in the future no matter what kind of career you go into,” she said. Carnathan agreed, saying students should pursue all available opportunities. “You have to take advantage of the opportunity,” she said. “You can’t leave it up to the person sitting next to you in class.”