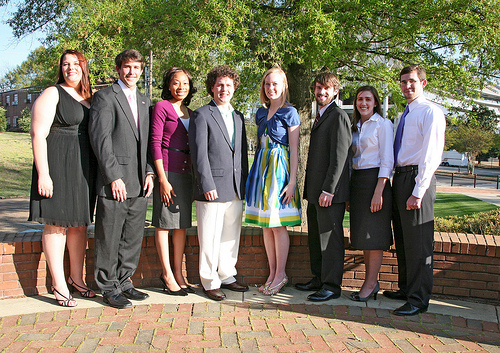 The Bagley College of Engineering is proud to announce the 2010 Student Hall of Fame inductees. This award recognizes students who have made outstanding contributions to their departments, the college and Mississippi State University. The eight students in the photo above are from left to right Jennifer Sloan, Cameron Blake Jeter, Glenda Young, senior industrial engineering major from Starkville, MS, Wade Spurlock, Chelsea Lindley, Timothy Pitts, Martha “Missie” Smith, a senior industrial engineering major from Columbus, MS, and Stephen Dix. Congratulations to all of these students!

Glenda Young began her involvement at MSU as a Summer Bridge Program participant. As 2008-09 president of IMAGE, she led a significant service project to provide tutoring and mentoring to Project Brickfire participants. She recently received the IMAGE/NSBE George Adebiyi Academic Excellence Award.

Young has served the Bagley College of Engineering in many capacities. She is an industrial and systems engineering representative and is an active member of the National Society of Black Engineers, Tau Beta Pi, the Institute of Industrial Engineers, and Alpha Pi Mu. She has participated in research in the Human Systems Engineering Laboratory, working on training programs to improve responses to disaster relief efforts. She also interned with Exxon Mobile Corporation, applying her industrial engineering skills to improve processes for the company.

Martha “Missie” Smith began her campus involvement early in her MSU career by participating in the 2007 study abroad program to Enforex Spanish Language School in Salamanca, Spain. Since then she also has participated in study abroad trips to South Korea and Australia.

She worked as a cooperative education student at Eaton Aerospace in Jackson, Mississippi. During that time, she was in charge of planning a lean manufacturing cell for one of Eaton’s product lines. Smith is active in the college serving as a mentor in the Engineering Living and Learning Community as well as coordinator for the industrial and systems engineering representatives. She is a member of the honor societies of Phi Kappa Phi, Tau Beta Pi and Alpha Pi Mu.